Possible otter activity (this could have been taken alive, but could also have been found already dead by the predator): 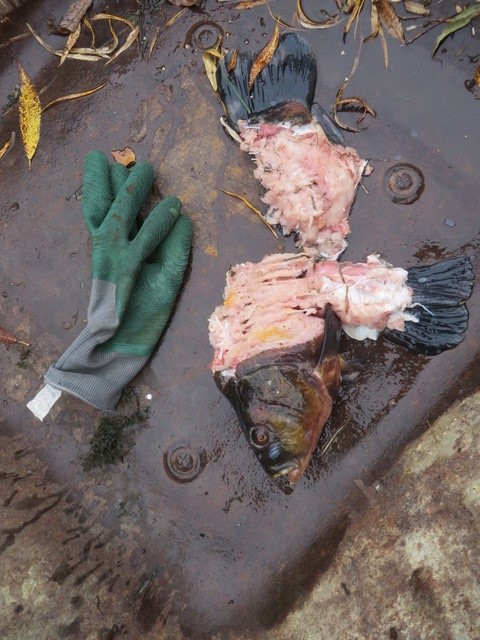 Dinobryon spp. This is a golden algae from the Chrysophyceae class. This is from a sample taken at Darlow March 2021 and may have caused the fish deaths that we sustained during the 2021 season.

Click on the link below for a crayfish fact sheet:

Fish leech, Piscicola. They may appear red, if they are attached to fish. For more information; http://www.pond-life.me.uk/fishhealth/piscicolageometra

Ergasilus sieboldi, two of them just below the tips of the tweezers. This is a picture from one of the moribund fish we had examined in the summer (2016). The pair of egg sacks are the prominent feature, giving it the common name of gill maggot. There are actually 3 beasts in this picture, the third one is below the right hand one with its egg sack together.

Argulus foliaceus. The adult parasite is the translucent creature in the centre of the picture. This picture was from a dead Darlow trout. Unusual because the parasites, according to the books, quickly leave a dead fish. The front end has the two wide apart small dots. On the original photo I can see 9 other smaller parasites. They are quite hard to spot until you get your eye in. And they move, which generally gives them away.

Lutra lutra. Or otter. This image was captured on one of our camera traps after suspicions were aroused. When the river is in flood, as it has been recently, fishing is hard and otters tend to look towards stillwaters. Hopefully, he (its almost certainly a roaming dog otter) will focus on crayfish and the less agile coarse fish. It was probably also emboldened by Linear being closed and the lack of human activity next door at night.